We’ve shared this guest bedroom with you before.  Full of peaceful colors, a restful bed and a wall of textural white-paper wrapped books–this Mountain Brook, Alabama guest bedroom is the kind of place most anyone would be glad to spend a few nights. 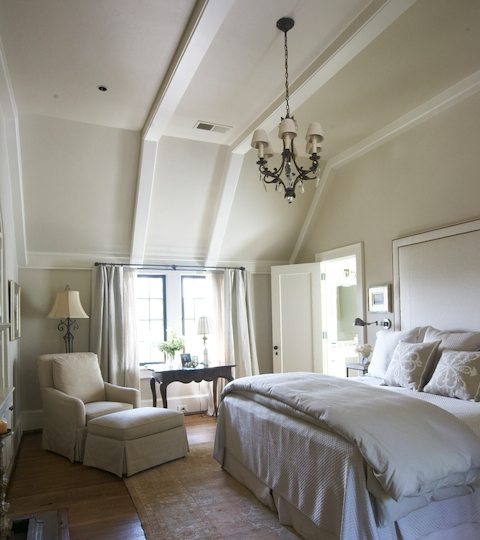 As good as this room looks now…it used to be much, much different.  And that’s the part of this space you haven’t seen before.

Obviously, the first thing we did to this space was to dramatically raise the ceiling.  Early on in the design process everyone involved agreed it would be worth sacrificing some attic space to gain ceiling height in the room.  There’s a direct proportion between how high a ceiling should be relative to the size of a room and this large space was begging for a ceiling higher than 8 feet!  After raising the ceiling, we added boxed beams for detail.  The wall of bookcases is also an addition to the space…we added the millwork not because the room necessarily needed shelving or storage but more because visually it felt like the right thing to do along what would have otherwise been a big blank wall.  Paige’s mom spent hours wrapping old books rescued from thrift stores and garage sales in white paper to fill the shelves and create a stunning backdrop.  Around the fireplace we added three slabs of Lagos Azul limestone, mitered at the corners.  The dark charcoal of the stone is a rich contrast to the rooms pale ivory and stone-colored tones.

11 thoughts on “[before & after] another look at a guest bedroom”